Plans are moving forward for the highly-anticipated Grand Texas Theme Park, scheduled to plant its roots in March 2015 near New Caney, Texas off Highway 59 and FM 242. But that's not all. The park is just one component of a larger entertainment district envisioned for the area.

The full district, called the Grand Texas Sports and Entertainment District, will span 640 acres and will be comprised of these seven themed areas:

The 150-acre Grand Texas Theme Park, coined an "educational theme park", will have all the trimmings of a traditional amusement park fitted with rollercoasters and other rides, but with a focus on Texas history and culture. 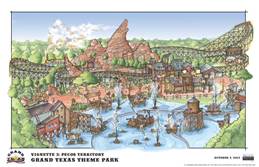 s a 40-acre site envisioned to incorporate the area's natural surroundings with water slides and lazy rivers. Other nature-themed activities like a wakeboard lake, equestrian trails, petting zoos, and zip lines - are planned throughout the entertainment district.

By 2020, officials anticipate 4.5 million annual visitors to the theme park district, which will bring roughly 2,000 new jobs to the area. As many as 1,600 construction workers are expected to be used during the building process, which begins in January.

More details continue to unfold, but for now it seems Texas will soon have a new worthy successor to the once loved Six Flags AstroWorld. 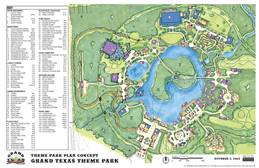 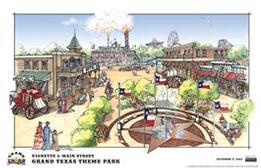