A planned luxury hotel will help bring new energy to a mixed-use development in the center of Downtown Houston.

Midway Companies, owner of the GreenStreet complex, has partnered with hotel operator Valencia Group to create Hotel Alessandra, a 250-room boutique property that will rise at Main and Dallas streets. The 25-story project is slated to break ground this summer and open in mid to late 2016, just in time for Super Bowl LI. 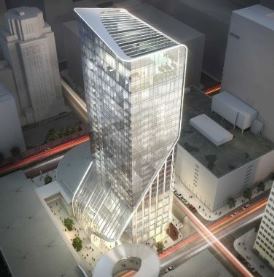 "This and other projects are going to rejuvenate downtown Houston, bringing a lot of excitement and activity to the area, where people will live, work and play," Kap Malik, design principal at Gensler, told the Houston Business Journal. "It will be a landmark building."

The hotel will feature 10,000 square feet of ballroom and meeting space, an indoor/outdoor event deck with a reflecting pool and a restaurant and bar.

Alessandra joins a list of other hotel projects going up around Downtown. The JW Marriott at Main and Rusk will open in August. A groundbreaking is slated for April on the Marriott Marquis which will rise adjacent to the George R. Brown Convention Center and open in late 2016. Other Downtown projects include a new SpringHill Suites and a Holiday Inn.

GreenStreet, formerly known as the Houston Pavilions, is home to Houston's House of Blues, Lucky Strike Lanes, retailers including Forever XXI and restaurants such as McCormick & Schmicks, Guadalaraja del Centro and Mia Bella.