Trenton Doyle Hancock knows how to make waves in the art world, and with the opening of his latest exhibit at the Contemporary Arts Museum this weekend, Skin and Bones, 20 Years of Drawing promises to keep Houston's art scene buzzing. 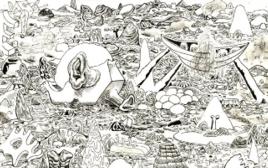 Hancock has made international waves in the contemporary art scene since emerging nearly two decades ago. Since then, he has received the Joyce Alexander Wein Artist Prize from the Studio Museum in Harlem and his exhibitions have been shown in nationally and internationally, including the 2000 and 2002 Whitney Biennials.

The current exhibition is the first in depth examination of Hancock's extensive body of work, from 1998 to 2014, recounting the saga of the Mounds, portraying birth, life, death and afterlife of fantastical creatures based on a complex fictional narrative.

The exhibit is sectioned into five different viewing experiences based on various phases of the artist's career.

Epidemic includes Doyle's early sketches, cartoons that he created for his college newspaper, as well as the debut of a new series of thirty drawings entitled Step and Screw.

The Studio Floor is a series of ten drawings that Hancock credits as the catalyst to his later pieces reminiscent of comic books and cartoons.

Moundish includes drawings associated with the artist's iconic mythology of the Mound and the struggles between good and evil.

From the Mirror examines self-portraiture within his work from the past two decades.

The final section, The Liminal Room, showcases stand-alone works that explore the artist's experimentation with drawing as a medium and practice.