HOUSTON (Jan. 9, 2013) - The board of directors of the Greater Houston Convention and Visitors Bureau has elected Sonia Garza-Monarchi, the owner of a small consulting business and former chief of Houston's protocol and international affairs office, as chair of the organization. Garza-Monarchi becomes the first female chair of the GHCVB and the second Latino in the organization's 50-year history. 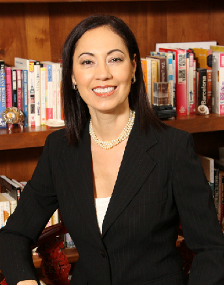 since January 2012. Her leadership of the 75-employee organization began on January 1, 2014. She oversees a 118-member board of directors representing more than 1,100 member companies in the hospitality community.

Ms. Garza-Monarchi is the sole proprietor of Garza Protocol Associates LLC, a Houston-based consulting business she launched in 2004. Through her firm, she has worked with a number of Fortune 500 companies including Marathon Oil and Halliburton, as well as major local organizations such as Memorial Hermann, to improve their cross-cultural communication. As a small business owner herself, Garza-Monarchi says she looks forward to representing the many local companies that rely on the GHCVB to bring business and visitors to Houston.

"I decided to take on this role for one main reason: I love Houston. I was born here, raised here and went to school here. I believe it's a great place to live, work and visit. Houston has an amazing story and I believe no other organization tells that story quite like the GHCVB," says Garza-Monarchi. "I have been involved with the GHCVB for many years as an employee and later as a consultant because I believe strongly in its purpose. I am very much looking forward to my tenure as chair."

Greg Ortale, president and CEO of the GHCVB, says Ms. Garza Monarchi brings unparalleled knowledge about Houston and the organization to her new role. "Sonia has been part of our organization in one capacity or another for two decades and that means she is acutely aware of not only what we do, but also all of the individual employees that make it happen," Ortale says. "I am extremely proud of what our team has accomplished in recent years and I know under Sonia's leadership that momentum will continue."

Jim Mills, past chair of the GHCVB and general manager of the Houstonian Hotel, led the committee that nominated Ms. Garza-Monarchi as the incoming chair. "Sonia is an incredible person and the right leader for the GHCVB at this time," Mills says. "She cares deeply about our city and our leaders and is guided by a strong sense of what is right for Houston and this organization. I believe the qualities she expresses-wisdom, graciousness and diplomacy-will serve our community well."

Prior to starting Garza Protocol Associates, Ms. Garza Monarchi served four city administrations in the Houston International Protocol Alliance (now the Houston Office of Protocol and International Affairs). She joined the office in 1988 and became executive director in 1993-the same year protocol came under the authority of the GHCVB. Garza-Monarchi advised four Houston mayors and dozens of council members on dignitary visits, official foreign travel and policy issues impacting local business and government. She also oversaw the expansion of the Houston consular corps by 28 countries to more than 80 before her departure.

Ms. Garza-Monarchi is a graduate of Rice University.

Other officers elected to serve in 2014 are: