Houston is home to some of the country’s best barbecue. Known for our briskets, sausage, and ribs, Htown pit masters serve up generous portions of perfectly smoked meats daily. We couldn’t bring ourselves to make a top 5 or even top 10 list because they’re all so good!

For a more expansive list, see all of our Houston BBQ listings.

Take a little drive up I-45 north, just beyond downtown, to Burns BBQ and Catering. This diamond in the rough off of N. Shepard is serving up some tasty old-school pit barbecue accompanied by their signature sweet and tangy sauce.

What to order: The three meat dinner is a popular menu item that lets you have a taste of almost everything.

If fancy things like a waiter or an actual dining room are what you're looking for, Byron's Gourmet BBQ isn't your place. If you're looking for no-frills, down home, smokehouse-style meats of all kinds, this spot has you covered.

What to order: The ribs and brisket take the cake.

Corkscrew BBQ has a devoted following among Spring, TX residents (just north of downtown). Owners Will and Nichole Buckman specialize in serving the most perfect cuts of meat with ever order.

What to order: The brisket and “dino” beef ribs are to die for.

Demeris is a family-owned-and-operated business that's been serving up traditional Texas barbecue in Houston since 1964.

What to order: Tender baby back ribs, jalapeno sausage and beans.

Since 2004, the Fain's have been serving their version of Tennessee barbecue to friends and family with its hickory smoke and savory vinegar base sauces.

What to order: Their moist pulled pork and tender brisket that can be eaten with or without sauce. 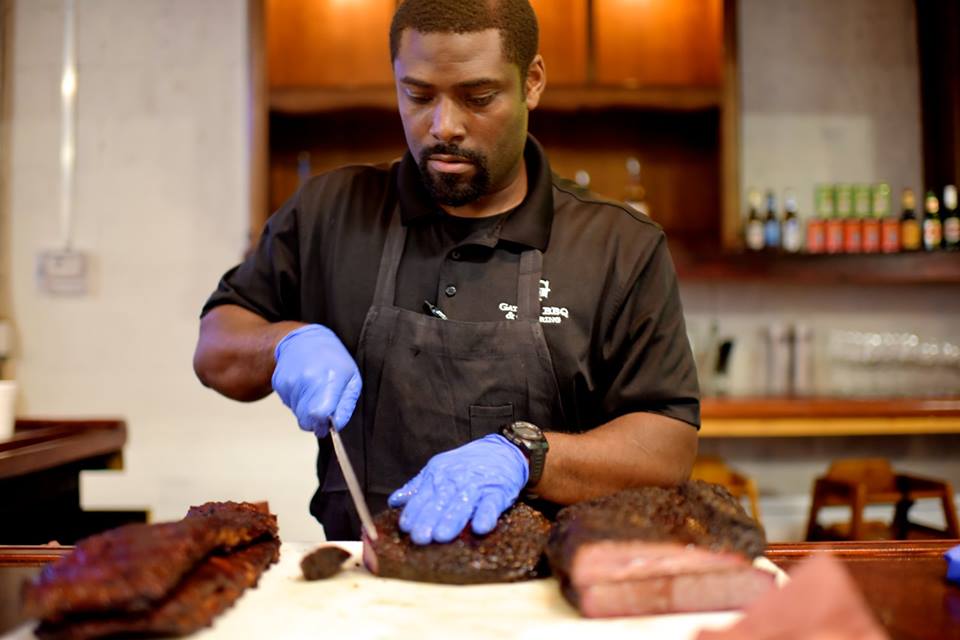 This Houston BBQ staple offers amazing barbecue in a small family atmosphere in the Heights. It was even named one of the 50 best BBQ restaurants in Texas by Texas Monthly (2013).

What to order: From ribs to brisket, Cajun-style sausage to pulled pork, this place has what it takes to satisfy your 'que cravings. 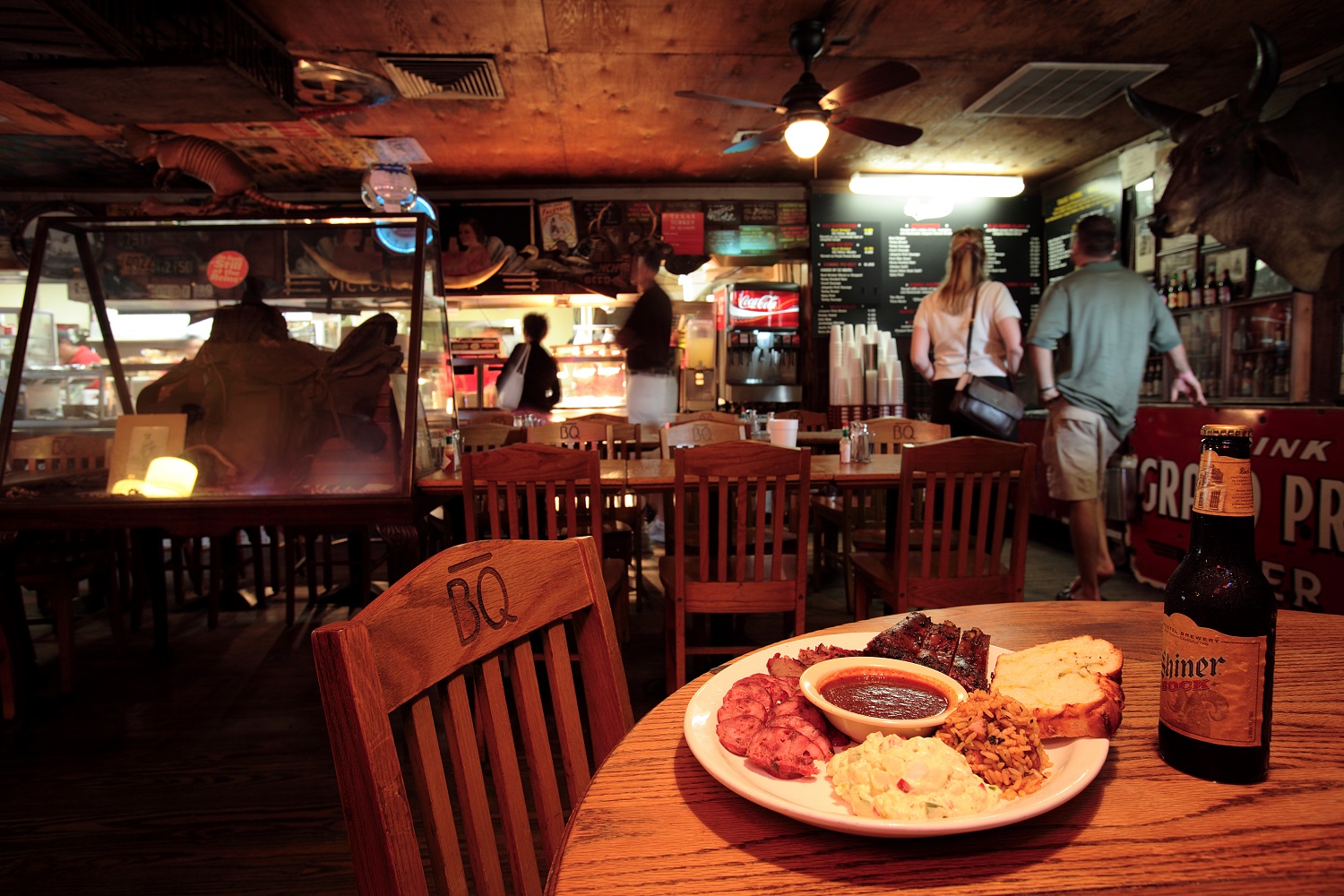 The first Goode Co. Texas Bar-B-Que restaurant opened in 1977. Even though Goode has since added burgers and seafood to his lineup, barbecue remains the company's mainstay.

What to order: Slow-cooked for 16 hours, try their expertly smoked brisket with jalapeno bread. Finish off with a slice of Brazos Bottom Pecan Pie.

Gyu-Kaku recently made its way into the Houston market, bringing with it a style of barbecue most Texans aren’t accustomed to but can surely appreciate: Japanese style.

What to order: Choose between marinades including miso, sweet soy, garlic, shio white soy, basil or tuzu. Once the meat arrives, the cooking begins on personal built-in charcoal grills right at the table.

Chef Ronnie Killen has too many accolades to name. The pitmaster’s BBQ joint has been named the #2 best BBQ in the nation by the Food Network. The much-anticipated Killen’s Barbecue experience is very Central Texas-like, with barbecue served cafeteria-style on freezer paper and cut to order.

What to order: Don’t let yourself leave without trying the amazingly tender beef ribs or fatty brisket.

The pits are fired up and ready to barbeque at Jackson Street BBQ in downtown Houston near Minute Maid Park. The joint venture is the brainchild of Houston BBQ legends Bryan Caswell, Bill Floyd and Greg Gatlin.

What to order: Head through the cafeteria-style line and pile on the smoked brisket, ribs, chicken and cole slaw then top it off with a homemade slice of pie.

This East End mainstay has been feeding hungry Houstonians lunch for over 60 years. Located at Mendel’s Ice House, the bbq joint was named one of Houston’s best by Zagat.

What to order: The bbq chicken with a side of sausage and potato salad is exactly what you need.

Make no mistake, this centrally located BBQ joint is not related to the legendary City Market in Luling, TX. Though, for hungry Houstonians that don’t feel like driving two and a half hours to grab dinner at the original, Luling City Market makes for a convenient and tasty alternative.

What to order: Grab a tray and load up on brisket, ribs, chicken and home-made sausage links, all cooked over post oak wood.

Pappas Bar-B-Q is a favorite for slow-smoked, lean and juicy Texas barbeque with all the trimmings.Chris and Harris Pappas, having learned from their grandfather, H.D. Pappas, know the secret to good food was quality.

What to order: Try their slow smoky brisket with warm homemade bbq sauce on the side. 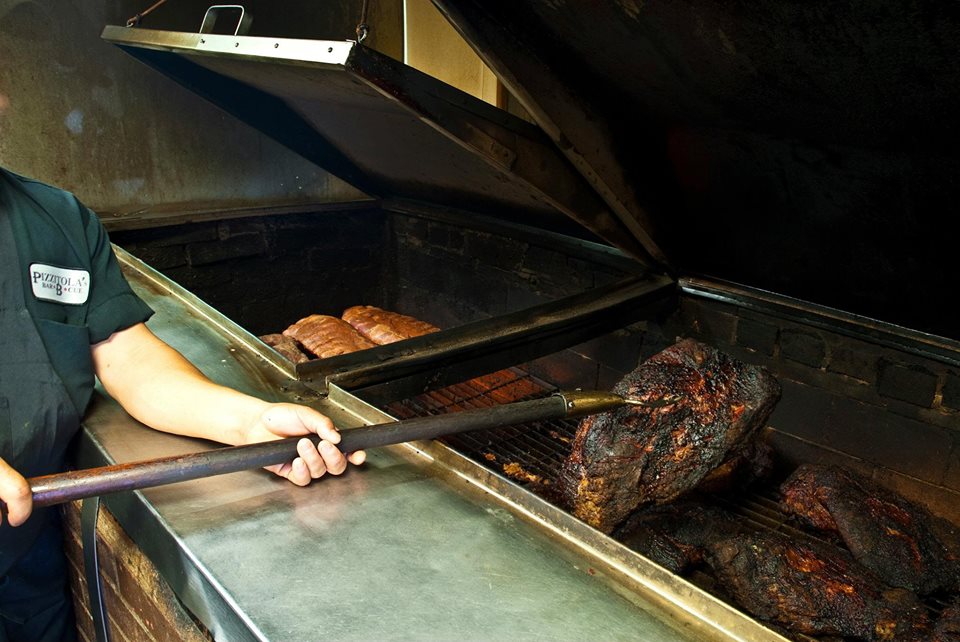 Opened in 1934 by pit master legend, John Davis, and continued since 1983 by Jerry Pizzitola, some of Houston's finest ribs, brisket, chicken and links are hickory smoked on Mr. Davis' original "open pits.

What to order: Get the spare ribs! But also consider the sampler plate for a little bit of everything.

The family-owned business has been dishing out hickory-smoked meats by the pound in South Houston since 1985. Co-owner and official ‘pittmaster’ Rayford “Ray” Busch retired his Harris County Sheriff’s badge for an apron in order to share the old-fashioned cooking they grew up with in Houston.

What to order: You can’t go wrong with their sliced brisket. Don’t let yourself leave without trying some amazing homemade desserts like peach cobbler.

Diners will find a line-up touting everything from Carolina-style renditions to Memphis BBQ and Kansas City-iterations, though the Texas variety will remain the main emphasis.

Authentic Southern BBQ gets an upscale spin at The Republic Smokehouse & Saloon. The Midtown restaurant, which is a collaboration between pit master Cedric Williams and the talent behind Hearsay on the Green, opened in March 2015.

What to order: You can’t go wrong with their fall-off-the-bone ribs.

What started as a burger joint in the mid-1960s and later became a community grocery store is now Virgie’s Bar-B-Que, a tiny but formidable smoke shack off Highway 290.

What to order: The brisket and ribs and loaded baked potatoes are regarded as some of the best in Southeast Texas

Pro-Tip: Cool down after a Texas-sized BBQ feast