Historic buildings are a great way to explore the past of any city, and Houston is no exception. From the art deco glory of City Hall to the groundbreaking modernism of the Menil Collection, the city contains many structures people can visit to trace the evolution of American architecture. Take a look at some of the buildings that have shaped this metropolis through the decades. Go ahead, take the tour!

Long before oil dominated Houston's economy, cotton was king. Architect Eugene Heiner designed a building in 1884 that would serve as the home of the newly formed Houston Cotton Exchange. The classic revival design with Victorian masonry, ornamental stonework, arches and sandstone molding still stands today, though the exchange is long gone. 202 Travis.

Constructed more than a hundred years ago when the county had just 150,000 residents, the 1910 Harris County Courthouse in Downtown has been painstakingly renovated, a $65 million project that restored the building to its previous grandeur. The elegant, two-story courtrooms have been restored with their ornate finishings and wherever possible original elements, such as the mosaic tile floor, have been brought back. Stairs that led to the main entrances on the second floor were rebuilt along with balconies overlooking the courtrooms. Topping off the inside rotunda is a new stained glass skylight. 301 Fannin.

Considered one of the finest art deco skyscrapers in the Southwest, the JPMorgan Chase Building (formerly Gulf Building, 1929) is a 36-story architectural jewel in the heart of downtown. The building was designed by Alfred C. Finn, Kenneth Franzheim and J.E.R. Carpenter. With its soaring Gothic-inspired frame, the building stood as the tallest structure in Houston until 1963. Inside its ornate lobby is a large banking hall and elaborate frescoes depicting milestones in Texas history. Brochures outlining the characteristics of the building are also available in the lobby facing Main Street. 712 Main.

Classical and ornate, the backbone of the Museum of Fine Arts Houston is the Caroline Weiss Law Building (1924) from architect William Ward Watkin. In 1958, the addition of the Ludwig Mies van der Rohe-designed Cullinan Hall significantly increased the square-footage of the museum. Mies designed a second addition to the building, the Brown Pavilion, which opened in 1974. Together with the Audrey Jones Beck Building (2000) this collection of structures house more than 45,000 works of art from antiquity to modern day. 1001 Bissonnet. 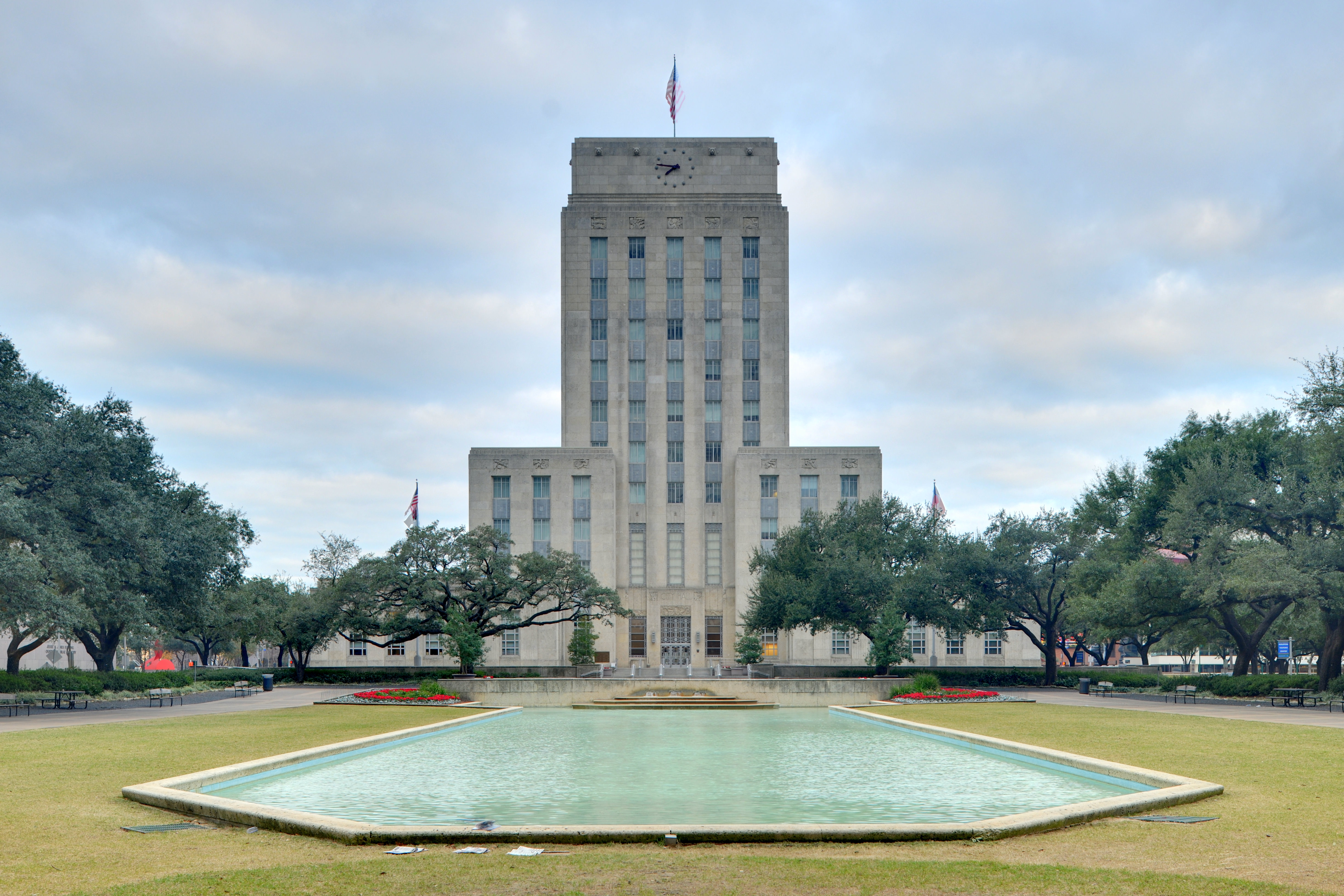 Built during the Great Depression by the Works Progress Administration, Houston City Hall (1938) is a study in the art deco architecture movement. Visitors can admire the restored rotunda with its elaborate inlaid floors and original murals and reliefs. While you’re there, check out the Houston Visitors Center just off the rotunda for unique gifts, information on Houston attractions and much more. 901 Bagby.

Houston's first shopping center, designed by architects Stayton Nunn and Milton McGinty, opened in 1937. Today the River Oaks Shopping Center remains a vibrant example of art deco architecture and a bustling retail destination. It was one of the first automobile-oriented retail developments in the United States and was viewed at the time as a model for future development. Portions of the original complex were demolished in 2007, but the bulk of it remains intact, including the River Oaks Theatre, an historic art house movie theatre built in the art deco style that is one of the last of its kind still in operation in the nation. Corner of West Gray and Shepherd.

In the 700-block of Louisiana downtown stand two buildings with a unique relationship to one another. Designed by Philip Johnson and John Burgee, Pennzoil Place (1976) is actually itself two identical trapezoidal towers separated by only a few feet, creating an interesting perspective on angles and a completely different appearance depending on where it’s viewed from. The newer Bank of America Center (originally RepublicBank Center 1983) is a Gothic-inspired tower with a defining triple-gabled roofline. The Johnson Burgee duo also designed this skyscraper, and did so in a way that accentuated the structure they had already executed across the street. 700 and 711 Louisiana.

Designed by famed Italian architect Renzo Piano and set in a quiet section of Montrose, the building (1987) that houses the Menil Collection is hailed as a masterpiece of modern architecture. In fact peers recently named it the second most significant piece of architecture built in the last three decades worldwide. One remarkable aspect—the horizontal concrete columns along the roofline that funnel natural light into the numerous galleries. Also on the Menil’s campus, you’ll want to visit the non-denominational Rothko Chapel (1971) and Richmond Hall (1930), which houses a mesmerizing light installation from Dan Flavin. 1515 Sul Ross.

Neo-Byzantine architecture permeates the bucolic, 100-year-old campus of Rice University. But a much newer structure there has made waves in architecture circles. Opened in 2008, the 6,000-square-foot Brochstein Pavilion designed by Thomas Phifer serves as a gathering place for students and faculty with natural lighting, couches and chairs, plasma TVs and floor-to-ceiling windows that look out on a large, trellis-covered plaza. Surrounded by the much older buildings of Rice, Brochstein is a study in melding the old with the new.

A special thanks to the Houston Chapter of the American Institute of Architects for their assistance in putting together this list.