The colorful mural from acclaimed graffiti artist GONZO247 is going up on the side of a historic building that currently houses Treebeard's restaurant, just across from Market Square Park. Work began on the mural in mid-March and should be complete by early April (see a time-lapse progression below).

The mural is an offshoot of the Greater Houston Convention and Visitors Bureau's new Houston Is... ad campaign. The half-million dollar, national imaging campaign now appearing in the New York Times and Wall Street Journal uses local trendsetters in the culinary and arts scenes to showcase the arenas visitors come to Houston to experience. The finished piece will show the Houston skyline in silhouette surrounded by a bright, abstract mosaic of vibrant color and some of the words used in the campaign, such as hip, tasty and inspired.

The mural is being executed in partnership with the Downtown District and the Mayor's Office of Cultural Affairs.

"The design of the mural is set up so that these words that represent what Houston is about are stacked in a way that they're actually holding the city up. They make the city what it is," says GONZO247. "Then from behind the skyline you have this explosion of color that represents the energy of the city, our diversity and culture."

The artist says there is also a more subliminal element to the image, which suggests a butterfly in flight. "Houston has been overshadowed for so long, sort of written off. But quietly we've been developing, sort of in a cocoon," he says. "Now the city has become what it was always intended to be, it's really taking flight."

GONZO247 launched his spray paint-based career in Houston 25 years ago. Since then, he's opened his Aerosol Warfare gallery/studio and worked with top brands such as Converse and Red Bull on urban-inspired ad campaigns. In addition to creating numerous murals around town, he's also produced videos documenting street art. 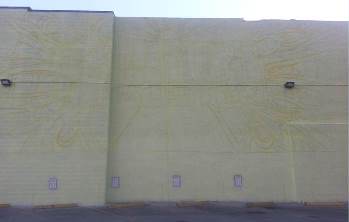 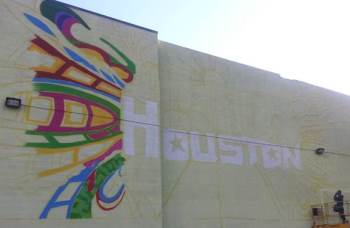 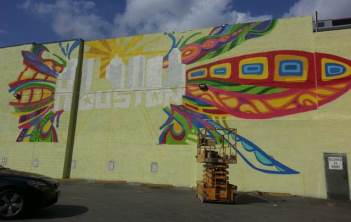 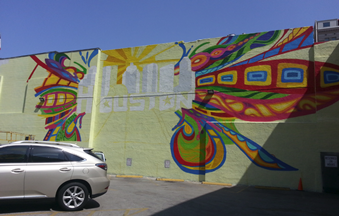 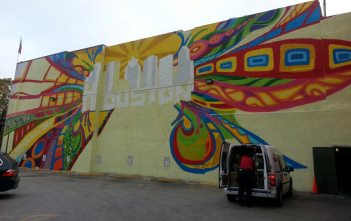 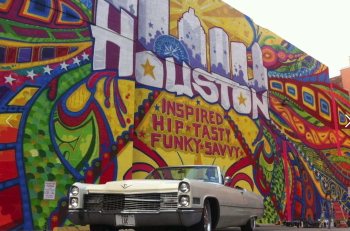